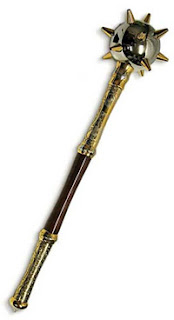 Mace (from all-Slavic bula — the cone, a tumor, a lump, a knob) — a shock cold weapon with a wooden or metal handle (core) and a spherical head — the shock part which has been quite often supplied with thorns (such weapon still call morgenshterny). Distinguish a usual spherical mace and Shestopyor on which head cutting edges (usually six pieces, from where and the name) were welded. Length of a mace is about 50 — 80 centimeters.
The mace is quite logical development of a club. The first maces with a stone head appeared in a neolith, from the metal — in a bronze age. This weapon is characteristic for the Ancient East. In a classical antiquity it was applied a little; at Romans the mace (keyboard) is entered only in 2 century AD. In the Middle Ages the mace existed in the Muslim East, in Western Europe (from 13 century). The mace was widely adopted in many countries including in Russia at 13-17 eyelids, but gradually I lost fighting value and became a symbol of the power of the military leader. Till 19 century it served as a power and advantage symbol at the Turkish pashas, the Polish and Ukrainian hetmen. At Cossacks remained prior to the beginning of 20 century under the name notch as accessory of stanitsa and settlement atamans.

Shestopyor — an Old Russian shock cold weapon of the XIV—XVII centuries. Represents a mace version on which head 6 metal plates — "feathers" are welded.
Shestoper appeared in the middle of the XIV century. The first options Shestopyor had the total length about 60 cm and triangular section of edges. Their weight reached 2,7 kg. By the beginning of the XV century the shestoper became easier approximately twice.
Length Shestopyor was about 70 centimeters and metals held it usually one hand for a handle separated by a metal ring, carrying out also functions. Sometimes on a shestoper the hook for capture of the enemy weapon was put.
Small weight Shestopyor gave the chance to operate rather easily it, and a starting position for attack the suspended was frequent. From this situation it was more convenient to catch a hook the weapon of the enemy or to carry out hand blow.
Shestopyor served also as a symbol of the power of military leaders. Here and there keeps ceremonial value and today.